Aquamarine Stone -The Birthstone of April

According to astrology, every month is ordained a certain birthstone, some more than just one. For the month of April, it's diamond, for May its emerald, and for March, it’s the brilliant aquamarine. The birthstone of all folks born in the month of March, it is a lucky stone for March babies as well as others. It is also the gemstone for the 19th wedding anniversary. Take a detour of the aquamarine rings gallery if you are approaching that year. 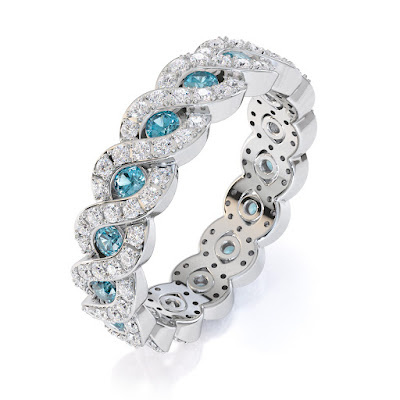 For those of you who are not familiar with aquamarine, it is a translucent, cool blue stone that is named after seawater. Embodying the crystal clear turquoise color of the ocean, this stone is at once beautiful and gorgeous. With a color that is a refreshing plunge in the cool blue water, the aquamarine brings to the picture freshness and beauty that are unequaled.

Aquamarine is member of the beryl family that has given us expensive and incredible gems like an emerald. Aquamarine is a color variety of the same mineral. Interestingly, this stone is mined not in the plains, but in the elevations of the Karakoram Mountains where it occurs in large amounts at 15000 ft. above the ground.

Aquamarine is identified by its signature greenish-blue color, but that’s not the only shade the stone occurs in. Some bear the turquoise color, while others are light in tone. It is a hard stone that scores between 7.5 and 8.0 on the Mohs scale.

Benefits of wearing an Aquamarine Stone

The Aquamarine stone has many benefits. The aquamarine stone color is that of seawater and that has a visually calming effect on the viewers. It is said that in the early centuries, sailors would carry aquamarine stones with them for it would calm the waves in the stormy seas and keep the crew safe in the water.

Today, the stone has great significance in modern marriage lives. It is believed that the stone if worn by either of the partners ensures happiness and peace in marital relationships.

The aquamarine stone benefits also spill over to the physical and psychological well-being of its wearers. It is famously known to heal all kinds of emotional traumas and relieve stress and worries. It cools down short temper and removes conflicts, bringing peace to mind and body. It helps clear the mind and calm the nerves, encouraging its wearers to speak the plain truth. It has also proven beneficial to help one get in touch with their repressed emotions and thoughts.

Spiritually and literally, the name Aquamarine means “water of the sea”. That indicates to the sparkling cool blue ocean color of the stone. For long star gazers and crystal ball readers have maintained that the stone is a reserve of spiritual energies. 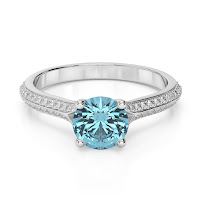 Spiritually, it is said to embody all things that is associated with the ocean. Soothsayers believed that this stone collected the seas to the heavenly bodies that reflect on the surface of the sea. That way it becomes the mirror that is reflective of itself and the keeper of many hidden meanings.

An aquamarine eternity ring in yellow gold helps explore the darkest and deepest recesses of one’s mind and gives us the opportunity to meet our soul face to face.

Aquamarine is a semi-precious stone which is what makes it so easily affordable for all in the first place. The stone sells in the stores for average price which is nothing close to that of emeralds, diamonds and like stones. Therefore, it can be safely said that aquamarines do not have the value of precious gems, but are also no valueless as counterfeit gems either. It mostly values between the two.

As for the value of the stone over time, there has been no noticeable incremental rise in the price of aquamarines in the past few years. But one must keep in mind that the stone has a higher value when it’s small in size. Comparatively, aquamarines that are big or over 25 carat cost relatively low.

So if you are planning to buy an aquamarine engagement ring, it’s best to go for the biggest size you can afford. The higher you go, the lower the price which is in direct conflict with most gemstones that we know of.

Is Aquamarine a Strong Stone

The energetic bedazzling sparkle of aquamarine makes it attractive and brilliant at once. The limpid transparency is one of the reasons why it’s covered by millions. But where longevity is concerned, is aquamarine a strong stone? According to its scores, it is a strong stone. Aquamarine scores 7.5 to 8 on the Mohs scale which is pretty high.

However, that does not say that the stone is indestructible. As a matter of fact, a stone of aquamarine can be very easily destroyed. It doesn’t take much effort to crack or even smash this stone. But don’t be alarmed because the same goes for diamonds and diamond is apparently the hardest gemstone of all. So, as far as gemstones are concerned, you want to handle all of them delicately and with care.

Keep this one away from direct exposure to sunlight for long hours for that can turn the bright sparkling color of the stone pale over time. So, if you are planning to be outside for long hours or tend your garden over the weekends in summer, it’s best to leave your aquamarine jewelry inside.

Who Can Wear It

That’s a very good question. The answer is anybody can wear it because it’s generally believed to be a lucky stone. However, people who would most benefit from wearing a piece of aquamarine jewelry or an aquamarineeternity band in yellow gold are people born in the month of March as it is their official birthstone. For those lucky few, this stone ushers happiness and prosperity in life.

Also, the aquamarine is a good stone to have on you if you are a mariner who spends a considerable amount of time out in the sea or someone who sails for a hobby. Believed to be the lucky stone of sailors in ancient times, it may keep you safe when the sea is rough.