Garnet: A Sensational and Versatile Gemstone

Royalty and connoisseurs across generations celebrated the glorious garnet in diverse hues. Garnets have an illustrious history that can be traced back to the Bronze Age. A stylish, intricate necklace of red garnet beads was found in an Egyptian grave dating as far back as 5,000 years. A group of silicate minerals, garnet has been treasured for their versatility and colour spectrum. The vivid red shade of garnet has also popularised it as an alternative gemstone for ruby.


The famed red garnet has gorgeous counterparts in oranges, greens, pinkish oranges, intensely concentrated purplish reds, and even interesting blues. Red garnet is undoubtedly one of the most widely available and common gemstones. However, all garnets are not born equal or abundant like a red specimen. Tsavorite, the famed green garnet, is rarer. Discovered near the Tsavo National Park in Kenya, the tsavorite requires extraordinary rock chemistries and natural conditions to form.

The January-born individuals call the diverse and beautiful garnet as their special birthstone.

This January birthstone has the power to bestow wealth, good health, and happiness to the wearer.

Garnet brings passion, joy, and vibrancy in the life of the wearer.

Those born in the first month of the Gregorian calendar adopted this stunning crystal for its healing qualities. This stone is perfect for those born with the zodiac sign of Aquarius.

Garnet has been worn for centuries as an enhancer and a strengthened crystal. It is a powerful and protective talisman for a January-born.

Garnet and its benefits

Garnet is considered as one of the most ancient talismans. It is regarded merely not as an ornamental jewel but also a powerhouse of positive and curative powers. The metaphysical properties of a garnet focus on utilizing its constructive vibrations. 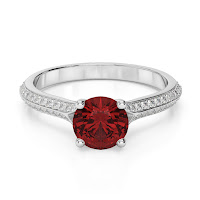 The red garnet is known to exude some mesmerising hues. From deep crimson, rose red to duller shades of scarlet or even violet tinges, the shades of red are varied and fascinating. The uvarovite garnet is emerald green in colour and is also the single consistently green specimen of the mineral. The uvarovite garnet is rare and can be commonly found in the druzy form. It promotes wealth, prosperity and helps one joyfully accept the graces the Universe bestows on them.  The spiritual and healing elements of garnet have a calming influence and build an aura of peace.

Garnets have been used both as abrasives and gemstones. Apart from jewellery, garnet has been industrially used as an abrasive to cut metals in water jets. Garnet paper and garnet sand are also used extensively. When it comes to be used as an abrasive, garnets are used in the categories of water jet and blasting grade. It has also been used as part of scientific experiments.

Garnet and its remarkable history

Folklores and legends abound about the emotional and physical healing energies of garnet.

Garnet is famous as one of the 12 precious gemstones on the Breastplate of the High Priest.

They were used in ancient Roman, Greek civilizations, and was regarded sacred by the Aztecs, the Mayans, the African tribes, the South American Indians, and the Native American Indians.

Thousands of years ago, the Egyptian pharaohs liked their red garnet necklaces enough to be mummified with them for an adorned afterlife.

Centuries later anywhere between 23 and 79 AD, red garnet was an important trading item. Roman scholar Pliny mentioned these “Carbunculus of India” in his narrative.

Availability of red garnet inflated with the discovery of the Bohemian deposits in central regions of Europe around the 1500s. This source emerged to be the nucleus of Europe's jewellery industry, reaching its peak around the late 1800s.

As garnet is an assemblage of closely related silicate minerals, the chemical properties of garnet tend to vary accordingly.

Garnet is one of the most common metamorphic minerals found in all possible colour with blue garnet being the rarest. It falls in the category of nesosilicate.

The presence of aluminium and calcium determine its colour variety. Hydroxide, manganese and magnesium also contribute to a garnet's hue.

Difference between garnet and ruby

Ruby is a precious gemstone whereas the red garnet is a semi-precious one. The primary difference lies in the availability of these crystals. Ruby is far rarer than red garnets. The colour of a ruby varies from vivid red to pinks. The red garnets have hints of pink and orange. Garnets have vitreous and resinous lustre and mostly tend to be opaque. However, rubies are generally translucent and in rarer cases, transparent.

Difference between garnet and hessonite

Hessonite is in fact a grossular type of garnet. However, it varies from regular red garnet in its composition of calcium-aluminium. The hessonite is also known as the 'cinnamon stone' for reddish-orange to yellow-orange variety of colour. Hessonite is relatively less expensive and readily available than other variants of garnet.

Who can wear a garnet?

When worn a piece of ornament, garnet can be worn by anyone. Nevertheless, if you are addressing garnet from the perspective of a metaphysical crystal or a tool of astrological intervention, consulting an expert is necessary. Crystal healing or astrology are specific practice areas that deal with the vibrations and colour spectrum of gemstones. It is better to be advised by an expert before you opt for a garnet healing instrument.

Is garnet a harmful choice?

Are you planning to wear a garnet crystal for chakra healing, emotional healing or balancing of energies? It is a good idea to consult an experienced pranic healer. A healer can guide you on its effective use or whether you require any other crystal for the issue.

If you're wearing garnet as a gemstone, there's no harm involved in the process. It is a great idea to elevate your fashion with stunning garnet jewellery that has been sourced responsibly with the least ecological or human right violation.

Garnet balances unstable energies. It brings serenity while healing emotionally and physically. Garnet inspires passion and was considered as a talisman for love and relationships. It alleviates emotional disharmony and temperament. It stimulates expanded awareness and amplifies cosmic vibrations. Garnet is the conqueror's stone and it will earn you passion and affection.

Garnet has a glorious past. A red, orange or green tsavorite will make an astounding solitaire engagement ring. The sheer diversity of colours in a garnet can be overwhelming. 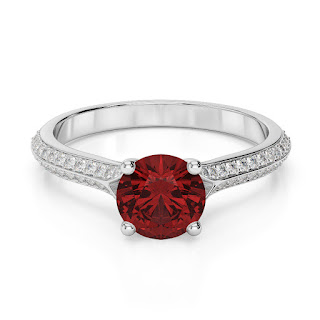 Take your pick from a rare demantoid garnet. A well-cut, fashioned demantoid garnet has high dispersion, displaying an arresting amount of fire.  You can either showcase it as a solitaire or may enhance the dazzling fire with the brilliance of diamonds. Small cropped diamonds creating a halo around a tsavorite is an artist's and fashionista's dream come true. It is individualistic and unique. A Lack of eye-visible inclusions in red garnet makes it an interesting choice for a central stone on an engagement ring. A garnet engagement ring is versatile and comparatively more affordable than any oh-so-common diamond solitaire.

Garnets are cut into calibrated sizes and standard shapes allowing to be set into different designs of jewellery. Full band or half band, an eternity ring studded with vivacious garnets make a lovely engagement ring. The design of a garnet eternity ring can be varied and intriguing. Think garnet and diamond five-stone eternity ring in white gold. It is elegant and luxurious. Think contemporary refinement with gorgeous and dainty garnets being encircled by a sparkling diamond halo. 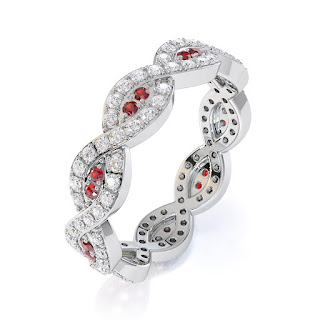 If you want to add to the sparkle, think of a singular row garnets covered by two rows of petite diamonds on both sides or vice versa. The three-row eternity band is perfect as an understated engagement ring. An alternate channel setting of garnets and diamonds or garnets of two different shades will create a magnificent garnet eternity ring.