Eternity Rings: A Fashion Ritual in the Making

Eternity rings are one of the biggest fashion trends of recent times. They are everywhere and anybody in contact with the civilization knows about them.

Eternity ring, for those of you who are still not fully familiar with this article of fashion is a ring that is paved all over with diamonds and/or gemstones.

The ring got its name from the word “eternity” which means time without beginning or end. The clear circle of the ring stands for eternity.

Diamond eternity rings are mostly bands-only with no centerpieces as seen in solitaires and other features.

The exclusion of the centerpiece is purposeful in their case, to make the circle of the band obvious to the eye.

What is the Meaning of an Eternity Ring?

There are many eternity rings meanings. One varies from another depending on their origin. In Old Egypt, eternity rings were believed to be bearers of a powerful symbol.

The circle equaled eternity and Egyptians represented strong human bonds like marriage between a man and a woman with this ring. It stood for something uninterrupted by the passage of time.

The modern meaning of this ring is pretty much in line with the ancient Egyptian interpretation. Today, it is the symbolic representation of a holy union between two individuals.

It stands for eternal love and commitment, things that do not diminish or alter with time.

When Should I Buy an Eternity Ring?

That depends, really. You can buy an eternity ring any time you like.

Typically, it is given to commemorate a special occasion, especially a milestone year in marriage or a romantic relationship.

But the gifting of full and half eternity rings is not limited to wedding anniversaries. It also makes an equally ideal gift on birthdays and on the occasion of the birth of a newborn.

If you are all for traditions, then you know what to get your partner on your next wedding anniversary. An eternity ring can also be a gift to oneself to commemorate self-love and self-appreciation.

So, there can be any number of excuses to buy an eternity ring. Feel free to play by your rules for there is no chance of going wrong with this versatile piece of ornament.

What Finger Do You Wear an Eternity Ring on? 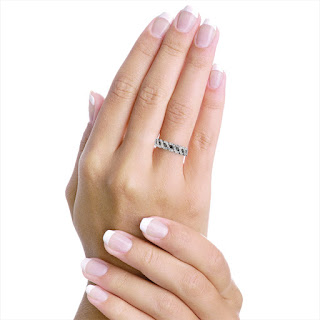 Again, there is no set rule for this. You can wear infinity rings the way you like. Some like to sport it on their fourth finger, especially if it’s a gift from a spouse or partner.

Others wear it on the ring finger all the same, regardless of who gifted it. The truth is, an eternity ring is a very special jewelry that deserves to be shown off and the fourth finger grabbing the most attention makes for the perfect finger for it.

Do You Have to be Married to Have an Eternity Ring?

Absolutely not! Anybody can wear an eternity ring with pride.

One’s status has nothing to do with it. Early on, eternity rings were exchanged between friends to mark a promise. So there is no hard and fast rule that only married people can flaunt them.